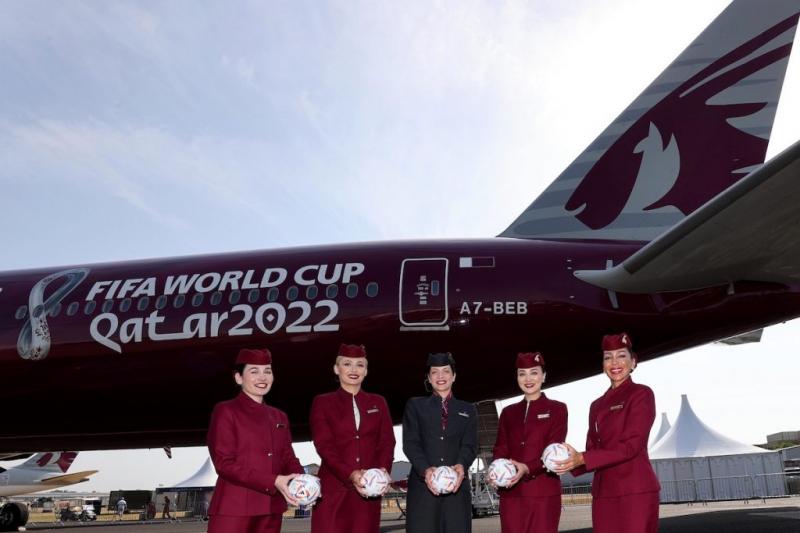 Qatar Airways will cut flying, and may lose money, during the World Cup in Doha later this year. But that may not matter as the country seeks to boost its brand with the event.

Large sporting events are often known for their athleticism and big shows of national pride by the host. A successful Olympics or World Cup can go so far as to put a country on the map in terms of global recognition.

But these events are often a different story for airlines. They can be a drag on revenues — potentially even loss makers — as lucrative business travelers, and other non-event related trips, are postponed or ditched completely during these periods.

That’s what Qatar Airways is preparing for when its namesake country hosts the Federation Internationale de Football Association’s (FIFA) World Cup later this year, from November 21 to December 18.

“It is a pain that we will have to take, and it is only for a period of 30 days,” Qatar Airways CEO Akbar Al Baker said of the sporting event at the Farnborough Air Show in the UK on Tuesday.

While Al Baker did not go as far as to say the airline would lose money during the matches, Qatar Airways will suspend flights or reduce schedules to more than 30 destinations around the world. It will also revamp its schedule at the Doha airport in order to “release” space for other airlines to add flights during the World Cup, he added. Destinations that will see reduced service are ones where few spectators are expected to travel to see the matches, for example from countries that did not qualify for the cup.

Kilimanjaro and Zanzibar, Tanzania, and Mogadishu, Somalia are among destinations that Qatar Airways will suspend during the cup, Cirium schedules show. At the same time, the airline will add flights to other markets, including Chicago O’Hare and Madrid. Overall, it will operate 10 percent fewer flights globally in November, when the World Cup begins, than during the month before.

The final number of flights that Qatar Airways will suspend has not been finalized, Al Baker said.

Other Middle Eastern airlines plan to add flights to Doha during the cup. Air shuttles will be offered from Dubai on FlyDubai, Kuwait City on Kuwait Airways, Muscat on Oman Air, and Riyadh on Saudia. The additional flights will help alleviate what is expected to be an accommodation crunch in Doha during the event.

British Airways’ experience during the 2012 Olympics in London shows the financial implications for airlines. While it’s parent company, International Airlines Group, did not lose money during the games that spanned July and August that year, IAG did report a significant hit to unit revenues — the amount an airline makes carrying a passenger per mile, or kilometer in British Airways’ case — as a result.

“Revenue performance for the quarter has been impacted quite heavily by the Olympic Games,” then IAG Chief Financial Officer Enrique Dupuy de Lome Chavarri said in November 2012. “We knew the Olympics were going to have a dilutive effect on revenues, on unit revenues. It’s not about volumes. It’s about the mix of traffic.”

Qatar Airways is the official airline of the 2022 World Cup and its brand will similarly be featured highly during the event. The financial toll of the event — beyond the “pain” Al Baker mentioned — is, as yet, unclear.

But losses may not be a problem for Qatar Airways. The Qatari airline is state owned — rather than publicly traded as IAG was — and a component of the country’s soft power around the world. A brief period in the red may be less important to the carrier than the global exposure it will receive during the World Cup.

“The World Cup will be a unique marketing spring board to put Qatar firmly on the map of tourism and drive awareness and consideration for the destination,” Qatar Tourism Chief Operating Officer Berthold Trenkel said in April.

Qatar Airways has otherwise seen a robust recovery from the pandemic. Al Baker said the airline increased its market share with travelers by continuing to provide global connectivity during the widespread pandemic lockdowns in 2020. Many other airlines grounded the majority of their planes, particularly that ones that flew long-haul international routes, at the time.

And travel demand remains “strong,” particularly in markets where restrictions have eased, Al Baker said. Demand is so strong, that the airline had to temporarily resume flying its largest passenger aircraft, the Airbus A380, despite his view that the plane was his “biggest mistake” — a view Al Baker reiterated Tuesday — to meet the market.