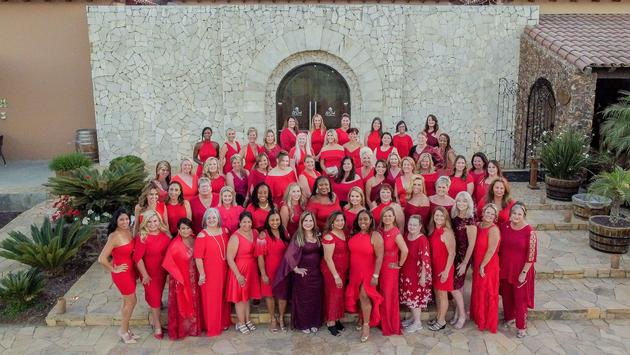 Participants in the 2022 Female Leaders in Travel Conclave. (photo via Travel A.L.L.I.E.S. Society)

“In support of the Travel A.L.L.I.E.S. Society’s mission to grow the leader, this event focused on understanding that leadership post-pandemic is different and requires that leaders recognize they can no longer lead the same as they did pre-pandemic,” said Female Leaders in Travel Conclave CEO Jennifer Doncsecz, who is also president of VIP Vacations.

“One of the greatest leadership hacks I have learned from attending this event every year is that women are stronger leaders when they are supported and encouraged by other women and this event creates a safe space where women can feel that support and encouragement, even if they don’t realize they need it,” she said.

This year’s meeting also put the spotlight on “taking control of the narrative as leaders versus simply running in the hamster wheel each day,” Doncsecz said, adding that the group also created “a leadership vision, formally writing goals for leadership, which is different than writing down business goals.”

The four-day event’s keynote speaker was Jennifer Zawadzki, CEO of Future You Project, who focused on creating a vision for leadership.

“Other topics included advice on taking risks, methods to handling career disappointments, as well as tactics to combat habits/behaviors that hold women back,” Doncsecz said.

During the event, which was held from June 4-8, Classic Vacations CEO Melissa Krueger received the organization’s Luminary Award.

“Her determination and generosity came to fruition as this event and location was a resounding success.”

For the uninitiated, the Female Leaders in Travel Conclave “began with 20 women who came together as a support group, so to speak,” Doncsecz said.

“Beyond the number of attendees tripling, this event now has formal speakers, panels and leadership-driven content, and the added bonus is the support system that continues to weave through the event.”

For its part, “the Travel A.L.L.I.E.S. Society’s foundation was rooted in the mission that began with Female Leaders,” Doncsecz said.

Travel A.L.L.I.E.S. is the formal organization under which Female Leaders falls, with members who are both male and female, she added.

For the latest insight on travel around the world, check out this interactive guide.