OTDYKH Lab participants will have the opportunity to show creative thinking, come up with travel programs that reveal the value of recreation in the low season. 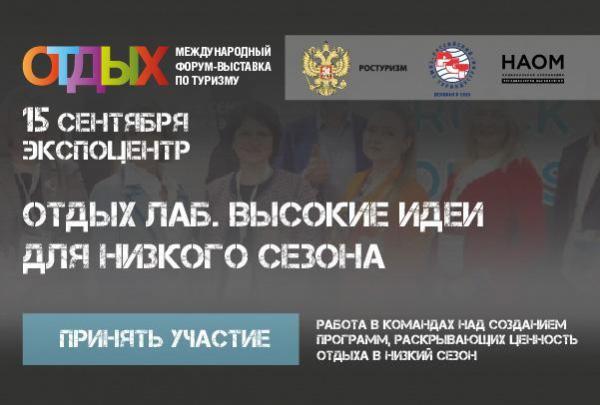 In accordance with the project regulations, by now regional teams have been determined, according to which groups will be created to work in OTDYCH Lab.

Attention! We are announcing the start of recruitment for regional teams from participants and visitors of the OTDYKH Leisure forum-exhibition! Each team can include 3 people from the business.

You can send your applications to the mail regions@rostourunion.ru specifying the name of the regional team up to 9 September inclusive. The organizers will inform the confirmed participants by September 12.

The formed teams create tourism products and present them to the jury already at the OTDYCH Leisure site on September 15 in the Marble Hall of Expocentre. Teams will be given 2 hours to develop the product. Then they will be able to present their idea to the jury, who will choose the two best options.

The laboratory jury consists of:

The best ideas and projects will be awarded with honorary prizes and will receive support from OTDYKH organizers Lab – Rostourism, PCT and forum-exhibition OTDYKH Leisure.