The rally organized by the Eurasian Commonwealth of Travel Industry Specialists – ESOT Union together with the Rosa Khutor mountain resort along the route Moscow – Voronezh – Rostov-on-Don – Krasnodar – Rosa Khutor has successfully completed.

Its participants are representatives of the organizers and partners, journalists and bloggers – on three CHERY TIGGO 8 PRO MAX vehicles they covered 1700 kilometers along the federal highways M-4 “Don”, M-29 “Kavkaz” and M-27 «Dzhubga– Sochi».

The main goal of the “PROspace” rally is was to test the possibilities of traveling by car to the Russian South. During the trip, the rally participants tested all the possibilities of roadside service and the comfort of the infrastructure, assessed the work of business and authorities in this area in each region along the route, studied the sights and their accessibility for road travelers. The quality of fuel and the convenience of filling stations were ensured by the Rosneft filling station network. – the partner of the rally, and the communication between the crews – the company “TRANSVYAZ” by providing the team with Comrade radios.

The first stop of the rally was Voronezh , where the team met with representatives of the administration of the Voronezh region, local travel industry and the media. The host party in the region was the GC “FEDERATION OF TOURISM”.
The round table at the House of Journalists discussed the development of tourism in the region as a whole and specifically – about the nuances of car travel along the M-4 “Don” highway. As the head of the Department of Entrepreneurship and Trade of the Voronezh Region Sergey Korchevnikov noted, one of the ways to detain car tourists in the region – build multifunctional roadside complexes, including accommodation facilities, food outlets, entertainment centers. And there are such examples in the region.

In turn, ESOT Vice-President Svetlana Chichkina shared the first results of testing a trip by car to the Russian South, noting the excellent condition of the route on this segment of the journey. The team also visited several tourist locations in the region, including the palace complex of the Princess of Oldenburg in Ramon, the Nelzha.ru family and children's recreation park, the White Well park, where you can stay in glamping.

Rostov-on-Don has become another city on the M-4 “Don” highway, which the rally team tested for readiness to receive car tourists. As it turned out, the Don capital has been taking into account the interests of car travelers for quite a long time: the project “On the Road to the South” is operating here; – specially designed for autotourists. Head of the Center ANO “Agency for Tourism and Business Communications of the Rostov Region” Anna Pavlova said that the main idea of ​​the – show guests heading to the Black Sea that in fact the vacation begins already in the Rostov region and motorists may well deviate from the highway to relax and see something interesting, as well as get acquainted with the legendary Don cuisine, because Rostov-on-Don is considered to be the gastronomic capital of the South of Russia.

Each point of the route “On the road to the South” is located at a distance of 50 km from the M-4 “Don” highway; and accessible by car. So, for example, this project includes the city of Kamensk-Shakhtinsky and the Loga park. – a unique location for a family vacation, which was also visited by the rally team. The excursion program and the reception in the region were organized by RST-South and Reina-Tour NTV.

The key event of the rally's stay in Krasnodar was the meeting with the Acting Minister of Resorts, Tourism and Olympic Heritage of the Krasnodar Territory Mikhail Zaritsky and the signing of the Cooperation Agreement between the ministry and the Eurasian Community of Travel Industry Specialists Union – ESOT". The document was signed by Mikhail Zaritsky and ESOT Vice President Viktor Kovalenko. The parties agreed to cooperate in creating and promoting interregional tourist routes, attracting additional tourist flows to the Krasnodar Territory, and creating new branded routes. The warm reception of the participants of the rally in Krasnodar, organized by the Ministry, has already become a confirmation of these intentions.

In addition, in each the city of the rally Dmitry Barashkov – co-organizer of the run and marketing and e-commerce director of the Rosa Khutor mountain resort; – held a presentation of the resort for colleagues, shared his experience in organizing the reception of car tourists at Rosa Khutor.

“According to sociological research, about a third of Russians prefer to travel around the country by car. Moreover, as a rule, this option is chosen by representatives of the economically active part of society. This is not surprising, because autotravel allows you to independently develop a route, move in your own comfortable mode and minimize costs. Our participation in the popularization of car tourism lies in the desire to show its advantages and share life hacks. Motor rally along the route Moscow – “Rosa Khutor” should demonstrate that such a trip can be an impressive journey, a great opportunity to get to know your country better, see the sights of such historically rich cities as Voronezh, Rostov-on-Don and Krasnodar. At Rosa Khutor there is all the necessary infrastructure for auto travelers. Staying at our resort, you can also explore in detail its surroundings and the entire region of the Black Sea mountain region,” said Dmitry Barashkov. 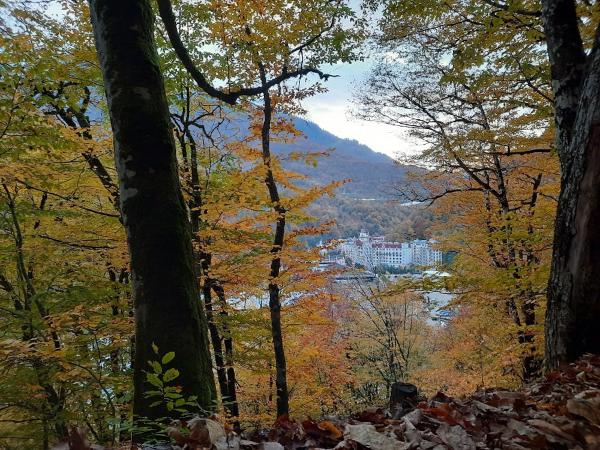 Rally «PROspace – Let's go to Rosa Khutor! successfully finished at the mountain resort on November 1, where the next day the team took part in the international forum “Mountains. Tourism. Business".

Informational support for the run was provided by the newspapers "Komsomolskaya Pravda", "Izvestia", "Rossiyskaya Gazeta" about domestic tourism TRIP2RUS.RU and other media.