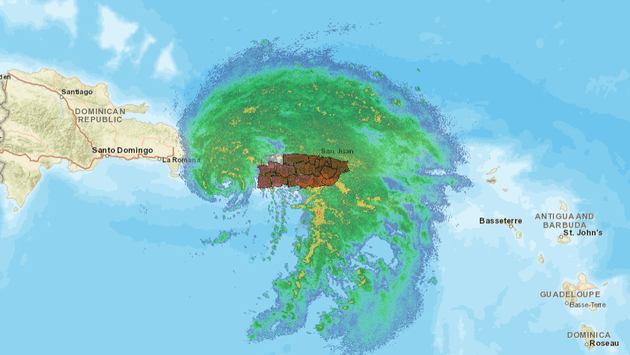 Hurricane Fiona over Puerto Rico, the Dominican Republic and nearby islands. (screenshot via National Weather Service)

The National Hurricane Center announced that Fiona has become a powerful Category 4 storm, with maximum sustained winds of 130 mph as it moves around 105 miles north of Caicos Island and 755 miles southwest of Bermuda.

“A turn toward the north-northeast with an increase in forward speed is expected by Thursday,” the National Hurricane Center said. “On the forecast track, the center of Fiona will continue to move away from the Turks and Caicos today, and approach Bermuda late on Thursday.”

Increasing swells will lead to a high risk of dangerous rip currents and hazardous boating conditions over the east central Florida coastal waters into late week and through the weekend.

The government of the Bahamas has discontinued all warnings for Turks and Caicos and the southeastern Bahamas. A Tropical Storm Watch is in effect for Bermuda.

The latest data from the National Hurricane Center revealed that the outer bands of Hurricane Fiona are still dumping heavy rain and high winds on areas of the Dominican Republic and Puerto Rico as the storm moves north into the Atlantic Ocean.

Turks and Caicos will encounter heavy rain and flash flooding on Tuesday, with hurricane conditions spreading across the islands by the night’s end. The Bahamas is expected to endure tropical storm conditions throughout Tuesday.

Officials in Bermuda are examining the storm track and preparing for the possibility that the island could also be impacted.

Airlines serving destinations in the region continue to offer travel waivers and cruise lines with scheduled stops like Royal Caribbean are rerouting ships from the Eastern Caribbean to the Western Caribbean.

The National Hurricane Center issued a video report of the current impact Hurricane Fiona is having on the Dominican Republic, Puerto Rico and the rest of the Caribbean.

Kimberly Miller of The Palm Beach Post released a tweet showing the projected path of the storm, which is now a Category 1 hurricane:

More than a million people remain without power in Puerto Rico on Monday after the storm knocked power out across the island. Officials urged residents to stay away from downed wires as crews continue to work in hazardous conditions.

Hurricane Fiona is bringing hurricane conditions to the Dominican Republic on Monday morning, with forecasters predicting the storm will impact the island through the afternoon. Tropical storm conditions are still being reported in Puerto Rico.

According to the National Hurricane Center, the expected rainfall in the Dominican Republic and Puerto Rico will “produce life-threatening and catastrophic flooding along with mudslides and landslides.” Flash and urban flooding warnings have been issued.

Much of Puerto Rico has lost power due to the Hurricane, with U.S. President Joe Biden approving an emergency declaration for the territory and authorizing federal agencies to coordinate disaster relief efforts, according to the New York Times.

National Hurricane Center data showed that Hurricane Fiona made landfall in the Dominican Republic near Boca de Yuma at around 3 a.m. Monday morning with maximum sustained winds at landfall at an estimated 90 mph.

Hurricane warnings are now in effect for the Turks and Caicos Islands and Tropical Storm conditions are expected in the southeastern Bahamas through early Tuesday.

Former Tropical Storm Fiona was today upgraded to Hurricane Fiona, with the eye of the storm making landfall over the island’s extreme southwest on Sunday afternoon. There, it is predicted to wreak havoc over the next 48 hours, causing “life-threatening to catastrophic flooding”, according to the National Weather Service (NWS) in San Juan, along with mudslides, rockfalls and power outages.

In the nearby U.S. Virgin Islands (USVI), airlines have canceled all September 18 flights into both USVI airports—Henry E. Rohlsen Airport on St. Croix and Cyril E. King Airport on St. Thomas. Both airports will be closed through at least 12:00 p.m. on Monday, September 19, the USVI Tourism Department announced on Sunday.

The U.S. Coast Guard had already closed down all USVI seaports, starting at 10:00 p.m. on Friday, September 16, and they will remain closed until further notice

Fiona is presently moving northwest over Puerto Rico, with areas of the storm also hitting the Dominican Republic’s northern coast, where it’s anticipated that the hurricane will have similar, potentially disastrous impacts through Monday.

The USVI is already being swept over by the hurricane’s outer rainbands, wind speeds are reaching 45 mph with gusts up to 75 mph, and up to six inches of rain are expected to fall across the islands.

“The National Weather Service has lifted its Hurricane Watch advisory for the U.S. Virgin Islands; however, the Territory remains under a Tropical Storm Warning and flashflood watch as Fiona, which has strengthened to a hurricane, continues its westward track toward Puerto Rico,” USVI’s official tourism website wrote in an advisory this afternoon.

“While there has been no damage or devastation reported on the islands, Governor Albert Bryan Jr. is urging residents to stay home as the storm continues,” according to the notice. “Visitors are encouraged to exercise caution and check with airlines, hotels, car rental companies, tour operators, etc. to determine what actions they plan to take or what policies the businesses have in place.” 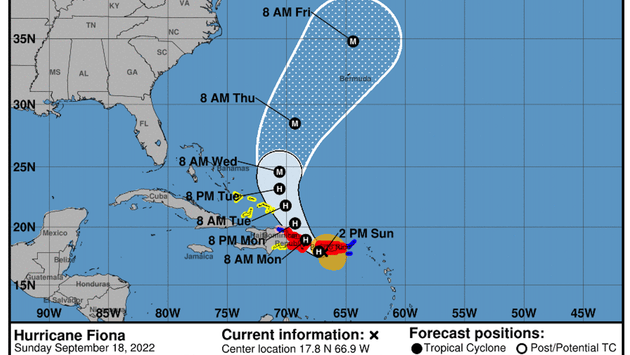 Joseph Boschulte, USVI Commissioner of Tourism, said, “As the Department of Tourism for the U.S. Virgin Islands, our utmost priority is the safety and comfort of our residents and visitors. We advise all to take the proper precautions and remain indoors. We send our warmest thoughts and prayers to our sister islands of Puerto Rico and the BVI.”

“On the forecast track, the center of Fiona will move near the northern coast of the Dominican Republic tonight and Monday, and near or to the east of the Turks and Caicos Islands on Tuesday,” the National Hurricane Center (NHC) wrote in an advisory issued Sunday.

Fiona’s trajectory is expected to turn toward the north-northwest on Tuesday. A tropical storm warning is therefore also in effect for the nearby British Virgin Islands (BVI), Turks and Caicos, and the southeastern Bahamas, including the Acklins, Crooked Island, Long Cay, the Inaguas, Mayaguana and the Ragged Islands.

For the latest travel news, updates and deals, be sure to subscribe to the daily TravelPulse newsletter here.