How different parts of the country are captured in the works of Monet, Renoir, Pissarro and other painters

Impressionism appeared in France in 1860- x and turned the traditional ideas about painting. Looking at the sunny, life-breathing and light-filled paintings of the artists of this trend, it is hard to believe that their works were not recognized for a long time and were considered a deviation from the canons of classical painting. “Around the World” invites you to travel around France with the help of paintings by famous impressionists.

Painting « A field of poppies…” was written by Monet in Argenteuil, which is located just 10 kilometers from Paris and in the 19th century was a favorite vacation spot for residents of the capital. Monet and his family lived in this suburb for seven years and created many bright, full of colors and colors of canvases. 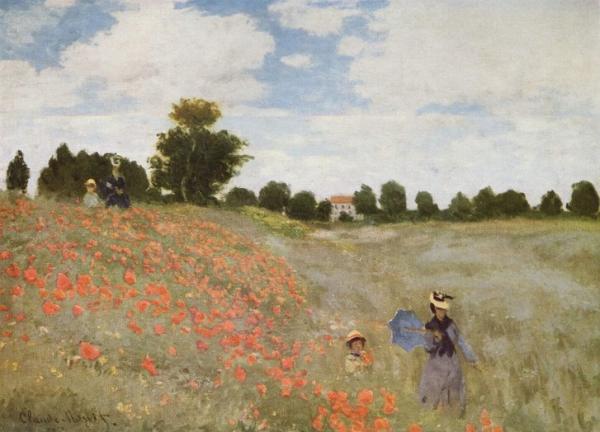 In Argenteuil, the artist worked a lot in the open air: he was always attracted by the opportunity to depict on the canvas a certain fragment of time, action and space. The painting “Field of Poppies at Argenteuil” reflects another passion of the artist – love for flowers. Once Monet even called his garden his main masterpiece.

This picture is clearly divided into several parts, the most important of which is the one that depicts scarlet flowers, contrasting with the more empty right side of the canvas. We also see two couples painted from the artist's wife Camille and his eldest son Jean. Their location helps to structure the space of the picture and convey the captured movement.

While working on the painting, Monet did not mix paints, but applied strokes of different colors, which the human eye perceives as different color shades. At the same time, the artist prescribed more significant things more carefully. So, the accents here are on the flowers and the upper part of the human figures in the foreground, while the box on the right side of the picture and the sky are less clearly defined.

Furious Impressionists: who cut the paintings of Manet and Degas and why

Chatou & nbsp; is another picturesque corner of France, loved by the artists of the new direction. It is often called the island of the Impressionists, because at this point the Seine is divided into two arms. As in neighboring Argenteuil, in the 19th century, the town of Chatou had an atmosphere of cheerful ease and noisy animation. 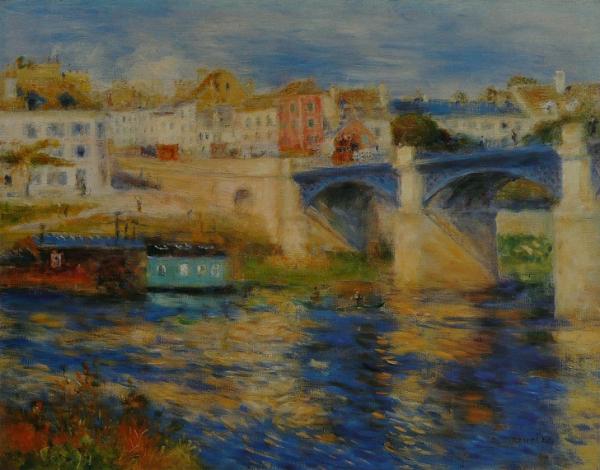 People came here to swim, ride a boat or have a picnic, and these simple subjects were reflected in the paintings of the Impressionists. Father Fournaise's establishment under the Pont Chatou, where one could not only spend the night, but also rent rooms, was Renoir's favorite place. It was in this institution that the artist created his painting “Breakfast of the Rowers”, in which he depicted his acquaintances and friends. In 1990, the restaurant “Dom Fournaise” was restored, currently there is a small museum.

The painting “The Bridge at Chatou” differs from most of the works of Renoir. Unlike Monet, the artist was much more fond of depicting people, and also preferred a more saturated color palette. And yet, “The Bridge to Shatu” is a landscape in which people are fuzzy dark figures.

The bridge is drawn more carefully than other elements, in addition, such a popular boating is depicted here. The landscape is characterized by fuzzy lines and a smoky light and air environment. The absence of clearly traced human figures evokes a feeling of remoteness, and the light and color palette help to see joy in the ordinary. ul>

Thanks to Basil's landscape, we set off from the central part of France to the south, to the artist's native region. Basil's name is much less widely known than the names of his friends Monet and Renoir, as he died at the age of 28. “Landscape on the banks of the Lez” is one of the last works of the artist: shortly after completing the work on the canvas, Basil volunteered for the Franco-Prussian War, where he soon died. 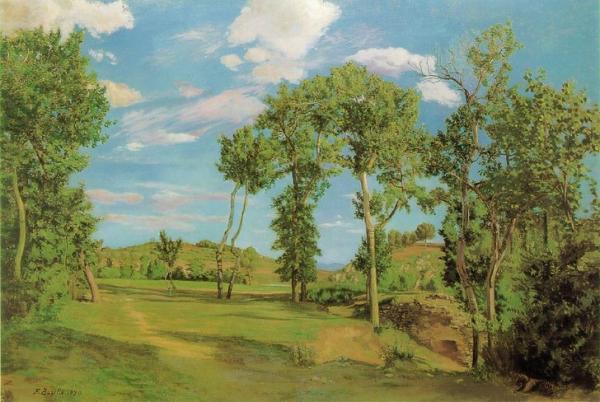 The artist completed the landscape in record time, it took him just over two months. During the work, Basil's relatives were away and did not distract him from the picture. In addition, he knew the area well. So, in a letter to his brother, he accurately indicated which place he depicted: “The bank of the Lez River near the mill at Navilau and the road to Clapier.”

The painting is very different from the landscapes of Monet and Renoir, since Basile preferred to paint the sun at its zenith, as well as depict a harsh light, different from the weightless and smoky light on the canvases of his friends. Basil also uses bright contrasting colors, and is more accurate and thorough in working on the details of the picture. Thanks to this, we can recognize trees and vegetation typical of the southern part of France on the canvas “Landscape on the banks of the Lez”.

Monet or Manet: Guess the Impressionists based on paintings

Camille Pissarro entered the history of impressionism as a master of the urban landscape. He painted several paintings depicting Rouen, located in the north of France. Pissarro went to this city after he saw the cycle of Claude Monet dedicated to Rouen Cathedral. 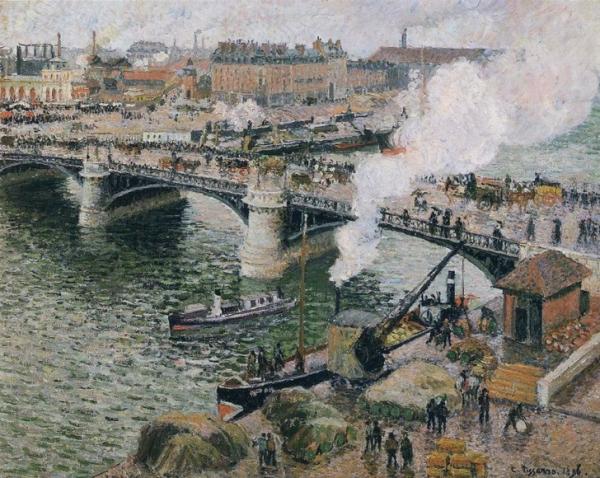 Pissarro, like Monet, uses light and air to create canvases. He is attracted by the possibility of depicting the city as a living organism that is in constant motion. He uses darker colors and thicker strokes, but his paintings look more realistic. The unusual angle is often explained by the fact that Pissarro painted from the window of the hotel.

The artist sought to reflect on the canvas the industrial features gradually appearing in the appearance of the city. This is what makes Rouen interesting for Pissarro, which, despite its exquisite architecture, became a port city and industrial center at the end of the 19th century. what is encrypted in the famous painting by Edgar Degas

The landscape of Paul Cezanne again brings us back to the south of France, but at the same time it is completely different from the paintings already considered. The canvas of Cezanne, even to an unprepared viewer, seems more daring than the work of other impressionists. It is no coincidence that the artist is often called the father of modern art.

Born in the south of the country, Cezanne often depicted southern landscapes in his paintings. The surroundings of the fishing village of Estac became one of his favorite subjects for landscapes. In the 1880s, Cezanne, in an attempt to escape from family troubles, came to Estac and painted about ten paintings depicting the Gulf of Marseille.

“View of the Gulf of Marseille from Estac” is one of the culminating works of this period and allows you to see the features of Cezanne's painting that influenced Pablo Picasso. It is primarily about the artist’s special dense horizontal strokes, as well as the use of such deep and saturated colors as orange-yellow.

Cezanne manages to achieve a three-dimensional image of water through the use of different shades of blue, as well as green and violet patches. Like other impressionists, Cezanne liked to paint the sea, sky and mountains, but in his image they seem to be more dense and clearly defined.