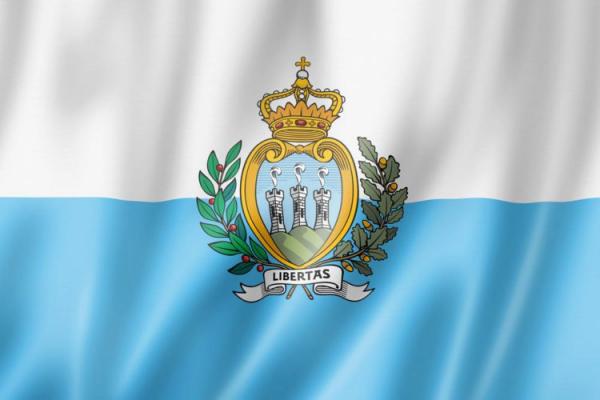 San Marino is a tiny state in Italy, which is a cozy oasis of freedom. Many call it a mountain that managed to become a whole republic. What to see in San Marino? – you ask. It's hard to believe, but on a fairly small area of ​​just over 60 km², a lot of interesting things fit. The sights of San Marino will be of interest to any traveler who decides to get acquainted with the Italian lands.

What to see in San Marino in the first place?

For those who are not in the know, San Marino is a dwarf state, surrounded on all sides by Italian lands. Despite its small size, it includes as many as 9 communes-cities, each of which has something interesting. 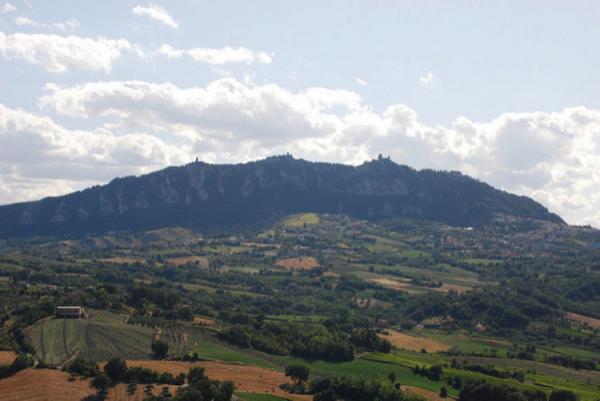 Mount Titano can be seen for many kilometers Mario Bollini

It is worth starting to describe the sights of San Marino from its highest point, located in a certain part of the Apennines. The mountain rises 740 m above sea level, and it stands in the central part of the capital of the dwarf state. Don't know where to go in San Marino? Try to conquer the described height. There you will see fortification towers, ancient gates, walls, bastions. The neoclassical basilica also attracts attention. From the highest point, you can see not only the country in which the mountain is located, but also those located in the neighborhood. 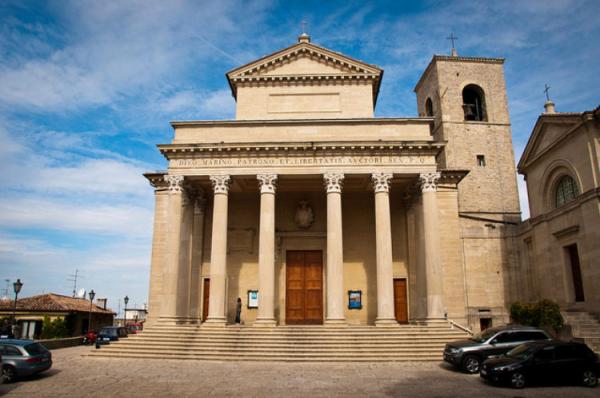 Entrance to the Basilica of San Marino by Giorgio Minguzzi

The next attraction of San Marino is the main church of the city, which looks like a neoclassical building. It has a covered gallery supported by eight Corinthian columns. Above them is an inscription in Latin. Not so long ago, the basilica was included in the list of World Heritage Sites. The description of this place says that under the altar there is a small urn, which contains some of the relics of the saint. They were acquired at the end of the 16th century. Along the paths leading from the church, you can reach the famous fortresses of Montale, Cesta, which are also considered the sights of San Marino. 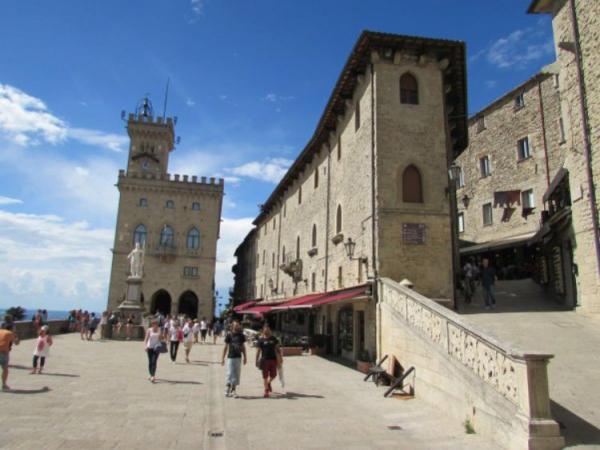 In the northern part of the historical center of Florence there is a square founded in the 19th century. This was done in the process of creating an urban ring road. Tourists love to spend time in the open space around the gate of St. Gall. Once it was limited to a moat, fortress walls, and in 1738 the Arc de Triomphe was built. The former structure of the square was destroyed in 1865, after which it was surrounded by similar buildings with arcades, made in the style of classicism. 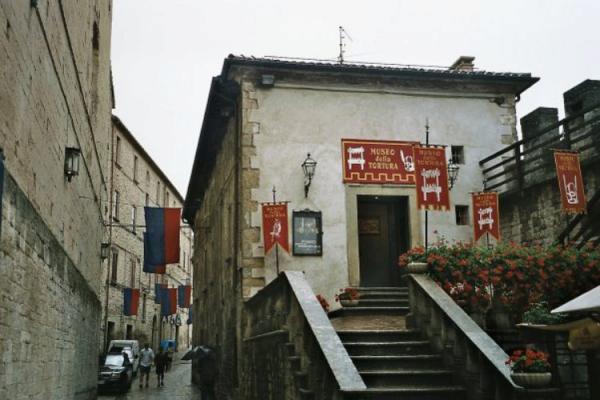 Facade of the Torture Museum in San Marino Corradox

Guides in San Marino often offer guests of the tiny state to visit an interesting institution located in the historical part of the city. The museum is one of a kind, allows you to learn about the history of torture. His collections include more than 100 pieces. tools, all kinds of tools. They were invented to hurt other people. This landmark of San Marino is interesting because it provides an opportunity to get acquainted with the tools of torture, time-tested and the institutions of the Roman Catholic Church that fought heresy. Not an exception are those that were invented in the XX century. The torture reconstruction workshop deserves special attention, the Iron Maiden, the Inquisitor's Chair, the Heretic's Pitchfork, etc. are considered classical instruments. The spectacle is certainly not for people with weak nerves. 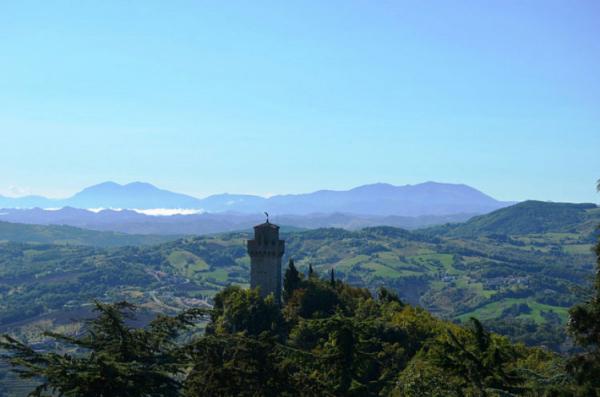 The third tower of Montale on the rock of Titano Pedro

The towers standing on Mount Titano are considered the symbol of the described state. There are only three of them, the last one is called Montale, it is depicted on the reverse side of the one cent coin. The described attraction of San Marino has the shape of a pentahedron, you can enter the tower, for this you need to climb 7 m. An interesting fact is that in the Middle Ages it was a prison, there is a deep well in the rock, into which prisoners were once lowered. Now this place is not free to visit, but climbing the tower is worth at least to appreciate the beautiful view of the surroundings. 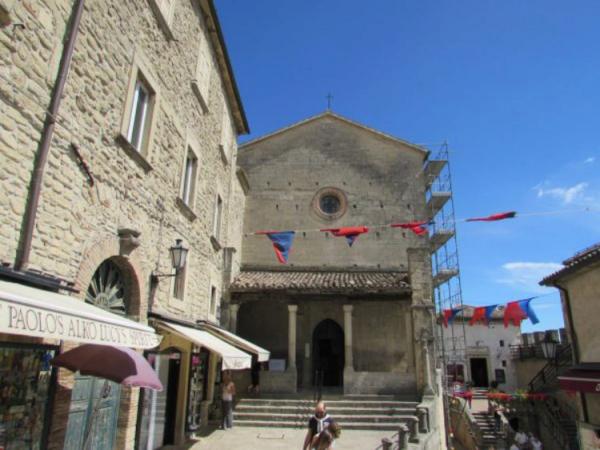 What to visit in San Marino? In the central part of the city stands the oldest temple, built in 1400. The reference point for its search is the State Museum along Via Piana. The described temple was repeatedly restored, during the last alteration it was given a neoclassical style. Not so long ago, the facade part and the covered gallery with columns were restored in their original form. The process was led by an experienced architect named Gino Zani. As you explore this San Marino landmark, pay attention to the crucifix that is located on the main altar.

See the beautiful places of San Marino in this wonderful video! 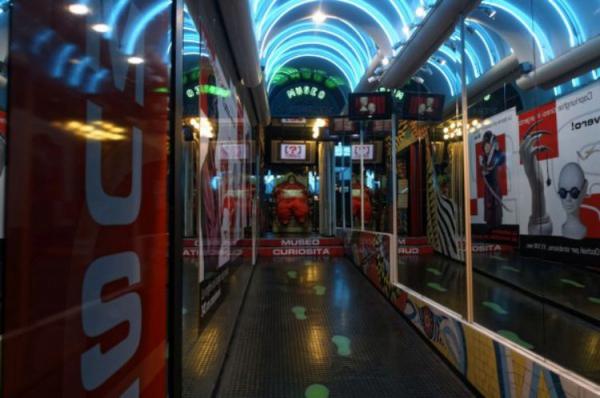 Do you want something unusual? On the recommendation of many travelers, visit the museum, where rather strange and unusual objects are collected and presented. Their peculiarity is that they were created in different eras and in different parts of the world. Unusualness was the main selection criterion. If these are copies of objects that once existed, people, they are presented in full size. Reviews of surprised tourists say that this attraction of San Marino can be safely called “Unbelievable, but true!”. 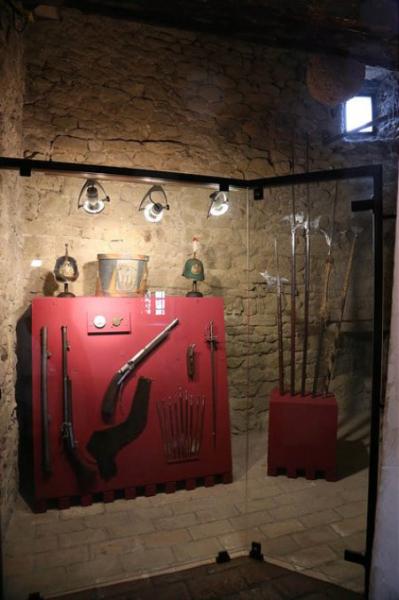 We continue the theme of the main attractions that you should pay attention to in the first place. This category includes the opposite of the Chesta Museum, which contains examples of modern weapons, mainly those used during the Second World War. Excursions to San Marino are often organized here, tourists try to take as many photos as possible to capture interesting expositions.

Sights of San Marino: what else to visit in San Marino?

Although the state is not large, the trip here cannot but be remembered by vivid pictures. First, a rating of the best attractions is proposed, now let's move on to another category. 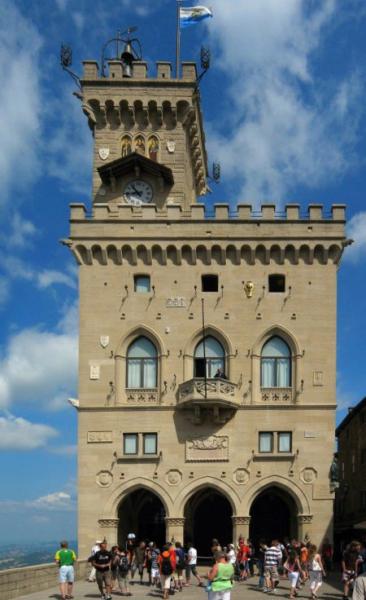 Always wanted to get into the heart of the political life of a tiny state? Welcome to the government building, which is also used as the City Hall. What to see in San Marino? The building where ceremonies are held, where all the most important people sit, deserves attention. A trip here will not disappoint, because tourists are allowed to see the town hall from the inside, appreciate the beauty of its interiors, wall paintings. 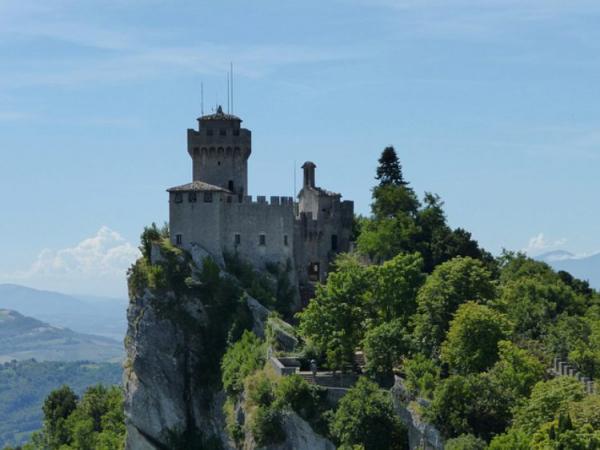 Overview of the defensive tower of La Chesta

Don't know what to see in San Marino in one day? Check out one of the three towers on the peaks of Monte Titano In terms of excursions, it is the most attractive for tourists. It has a good view of the territory, and the hill has an interesting history of appearance and existence, which the guide can tell you. 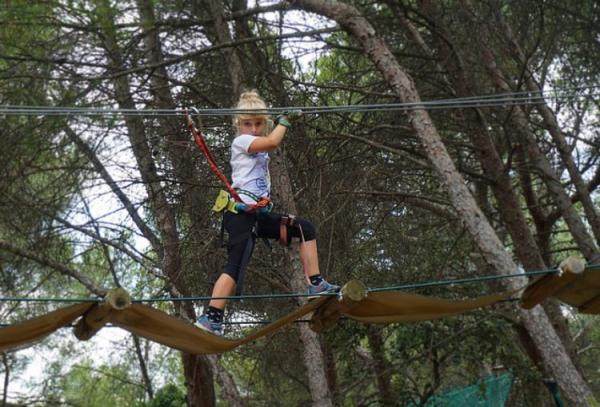 Rope route for children in the adventure park

There are interesting places in the republic for outdoor enthusiasts. We are talking about a vast recreation area, where there is a lot of space for organizing picnics. Adults and children can't help but like the rope parks, which require endurance and skill to conquer. Still not sure what to see in San Marino? Go to the adventure park and let yourself be immersed in the world of conquering peaks, overcoming difficulties. 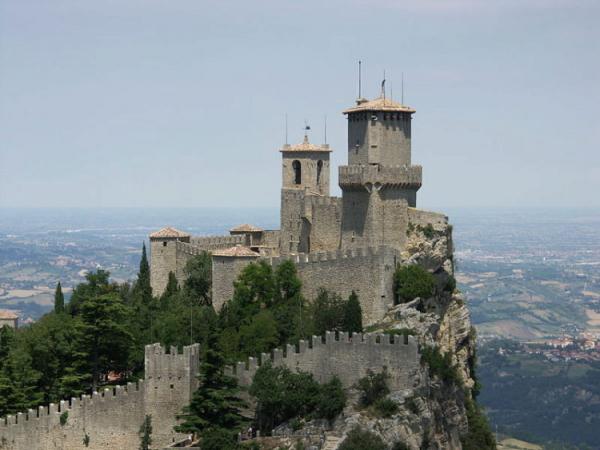 The majestic fortress of Guaita Shesmax

Continuing the theme of what you can see in San Marino, I would like to pay attention to the first of the three world-famous towers. It is also known as Prima Torre and was built in the 11th century. In the old days it was used for defense purposes. 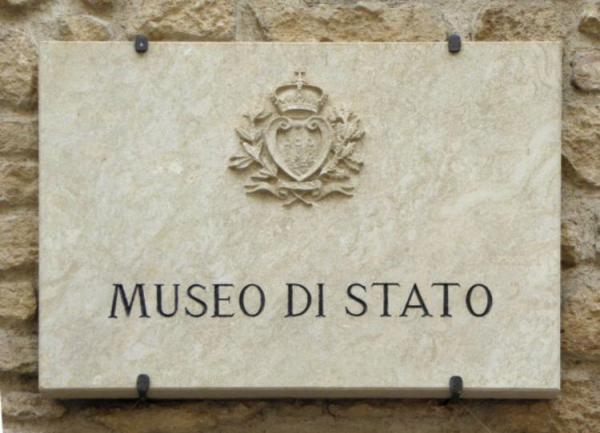 What to visit in San Marino from the old? An excellent option is the museum, opened more than 100 years ago. The funds were used by those who donated the citizens of a small state. The building presents a variety of expositions, of particular interest are those related to art, numismatics, and archeology. Artistic, historical artifacts that are directly related to the history of the republic are no exception.

In conclusion, I would like to say that it is not enough to know what to see in San Marino, you still need to competently approach the organization of recreation in an unfamiliar country. Hotels in San Marino are also available, but it is better to book rooms in advance, using special services for this. By the way, for those who are not in the know, the mini-state does not have its own airport, you will have to get here by bus from Rimini. They follow the route 6-8 times a day. 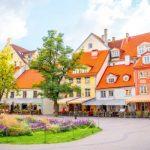 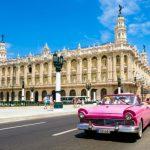 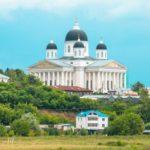 The best sights of Arzamas 2021 (PHOTOS)