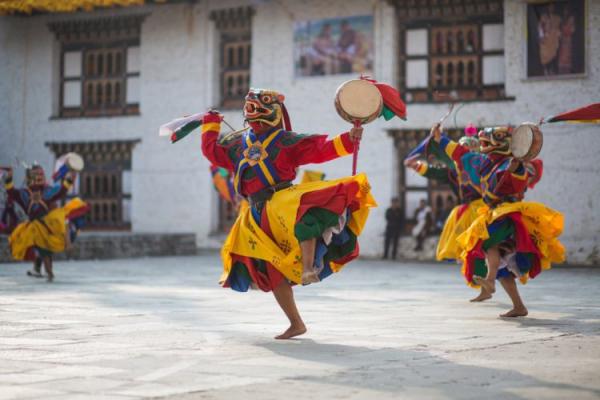 Asian countries seem especially attractive to tourists, and the sights of Bhutan are also interesting because they are located in the state of “happy people”. There is no hustle and bustle usual for a metropolis, a friendly atmosphere reigns and the best conditions have been created for meditation and restoring peace of mind. There are more than enough options for what to visit in Bhutan – the kingdom is replete with ancient buildings and natural beauties, and in some settlements traditions of the 15th-16th centuries have been preserved. The uniqueness of the state is due to centuries of isolation, and even in the era of advanced technology, time flows here measuredly, making it possible to fully enjoy the main attractions and exotic cuisine. To make it easier to choose what to see in Bhutan, our list of tourist sites recommended by most experts and ordinary travelers will help.

First things to see in Bhutan

The size of the state is small, so even with a short trip there is a chance to see the most interesting places. Before deciding what to see in Bhutan, decide how much you are willing to spend on excursions and with whom you plan to go on them. It is unlikely that young children will enjoy visiting temples or visiting museums all day, but adult travelers will find this pastime very exciting. The sights of Bhutan are diverse, and now you will find out which of them are worth visiting first: 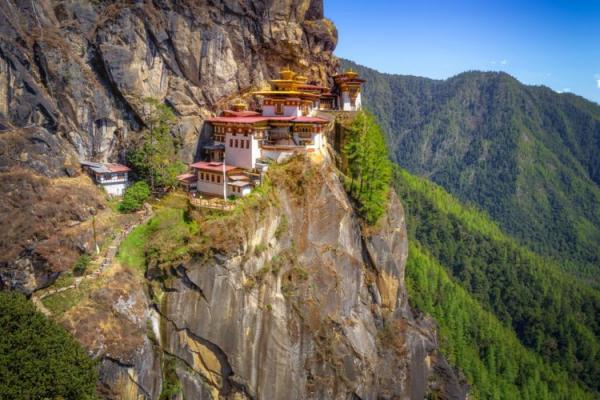 Taktsang Lhakhang Monastery is a Buddhist temple located in the highlands and striking with incredible panoramic views of the slopes, gorges, passes and peaks. The monastery is built in such a way that it seems that it is floating in weightlessness, while remaining the embodiment of spirituality and strength. This place is advised when travelers ask what to see in Bhutan for familiarization with mystical customs and deep inner relaxation. Several viewing platforms are specially equipped for tourists, you can also admire the mountain peaks from the balconies.

“Palace of Great Happiness” on the banks of the rivers

Punakha Dzong is a traditional style complex that performs both a protective and spiritual function. The monastery was erected in the 15th century at the place where the two rivers Pho Chu and Mo Chu join, and so that the enemy could not attack unnoticed, the builders provided only one way to the fortress – along a steep stone staircase. Huge strong gates provide additional protection to the inhabitants. At a height of 1200 meters, the building reflects the greatness of Buddhism and the talent of the architect, who managed to create an impregnable fort with an elegant visual appearance.

The city of Paro is a famous landmark of Bhutan, located in the valley of the same name and distinguished by its ancient history. For many centuries, it was through this settlement at an altitude of about 2.5 thousand meters that the only way to Tibet passed, which is a sacred kingdom for Buddhists. Buildings with unique interior decoration and unique murals have survived almost intact to our times. In terms of prosperity, Paro is the leader among Bhutanese cities. 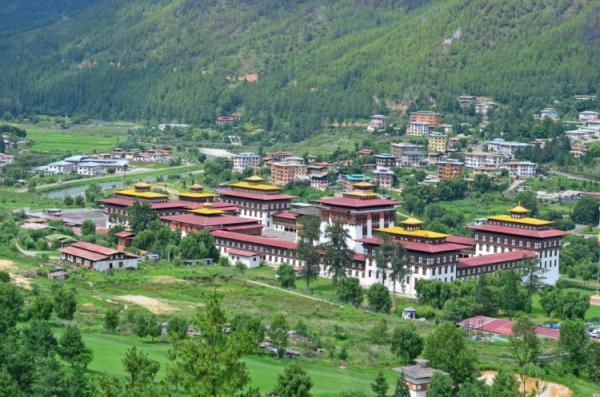 Panorama of the lamaist monastery Trashi-Cho-Dzong

Trashi-Cho-Dzong Monastery is a popular, but most of the time closed to tourist attractions in Bhutan, which serves as the official residence of the local Supreme Lama. In this building, meetings of the court and the Bhutanese government are held. Unlike ordinary monks, the local ministers of the monasteries constantly communicate with people, not observing a reclusive lifestyle. Celebrations for children are regularly held here, you can talk on religious topics or simply observe the traditions and lifestyle of the inhabitants of Trashi-Cho-Dzong. The best time to visit here is the Thimphu Tsechu holiday, during which you can join the thousands of spectators of exciting shows and theatrical performances. 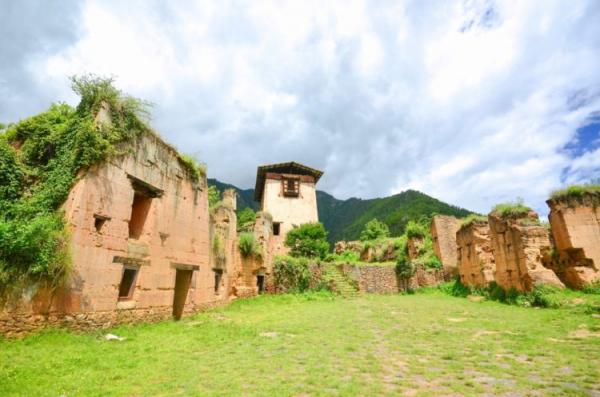 The Drukgyal Dzong fortress is the ruins of an ancient settlement in the western part of the country, which in the past were an important strategic object. Like most local structures, it is both a Buddhist monastery and a fortress, and the Drukgyal Dzong was built after a great victory over neighboring Tibet, dating back to the 17th century. Unfortunately, now most of the fortification complex is in a deplorable state – in the middle of the last century there was a large-scale fire here, and the local authorities have not yet carried out reconstruction.

Watch the beautiful places of Bhutan in this wonderful video!

One of the most visited attractions in Thimphu

Thimphu Chorten Temple is another good idea of ​​what to see in Bhutan in 1 day to explore Buddhist life. By the number of travelers coming to Thimphu, this is the most frequently visited tourist site, built as a tribute to and memory of the third ruler of the state, revered by the local population as a saint. Ten years ago, the temple area was reconstructed and expanded, which allowed more tourists to simultaneously view the altar of Buddha Samantabhadra with nearby sculptures of other divine beings. The building is quite new (date of construction – the seventies of the last century), but no less exciting than the ancient temples. 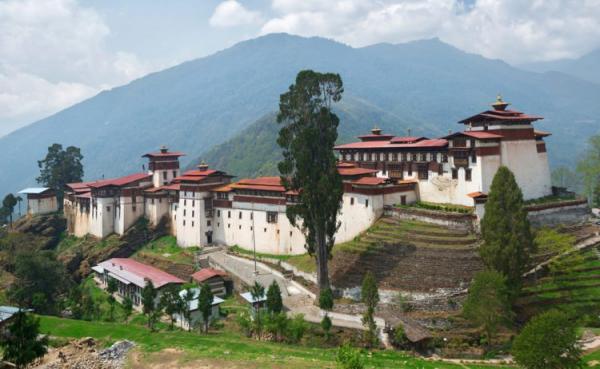 View from above of Trongsa Dzong

Trongsa Dzong is a fortress built in the 17th century, which is consistently included in the list of the most visited sights of Bhutan due to its huge area and unique location – in the gorge between the western and eastern parts of the country. The complex performs several functions at once, being an administrative center, a protective fortification and a monastery.

Sights of Bhutan: what else to visit in Bhutan

So that you can continue your acquaintance with the kingdom and reveal its beauty and grandeur to the fullest, we will tell you about other options for what to see in Bhutan. Each of the attractions is beautiful in its own way, so their place in the ranking is conditional. Focus on your individual preferences and the amount of free time to decide where to visit during your vacation in South Asia.

Excursions in Bhutan to such objects will be extremely exciting: 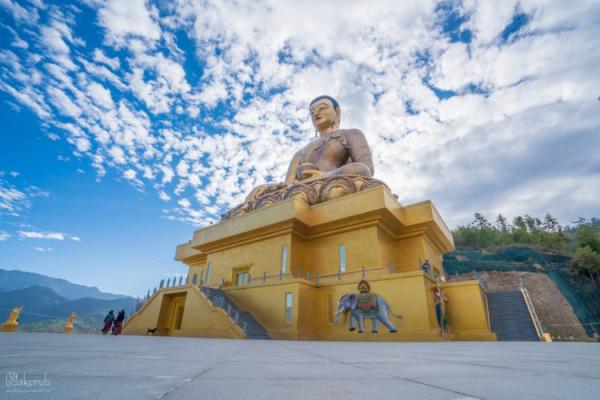 A statue of Shakyamuni Buddha seated above a gilded meditation hall

Buddha Dordenma is one of the newly created sights of Bhutan (date of construction – 2010), which cannot be ignored. With a height of more than fifty meters, Buddhaharupa of Buddha Shakyamuni occupies the 23rd place among the existing statues in the world, and for its construction it was necessary to pay a total of about one hundred million dollars. The statue is a temple on the territory of the ruined palace complex of Sherab Wangchuck and has a gold finish, and inside there are more than a hundred sculptural images of the saint with a precious coating. The decoration of the temple makes an indelible impression with its luxury.

The bridge leading to the watchtower of the Rinpung Dzong Monastery

The Rinpung Dzong Monastery (Paro Dzong) is a complex of fourteen temples of one of the Buddhist schools, an exhibition area and a watchtower. The monastery became famous among tourists thanks to the enchanting Big Festival, held annually to glorify Buddhist deities.

The round building of the National Museum of Bhutan

The National Museum of Bhutan is part of a dzong dedicated to exhibits related to the Buddhist religion, the history of its development, and saints. A huge number of pilgrims and ordinary guests from other countries come here, for whom there are many unique exhibits in a specially equipped building, and among them there are those that allow you to immerse yourself in the everyday life of the Bhutanese people.

Manas National Park is one of the few places in the world where you can observe the rarest species of animals in a natural setting, including Himalayan bears, rhinos, Bengal tigers and leopards. Thanks to the protection of the state, all these animals managed to be preserved and ensure their life in natural conditions. In the park, tourists move from alpine meadows to real tropics, they can see real glaciers and examples of other varieties of ecosystems. 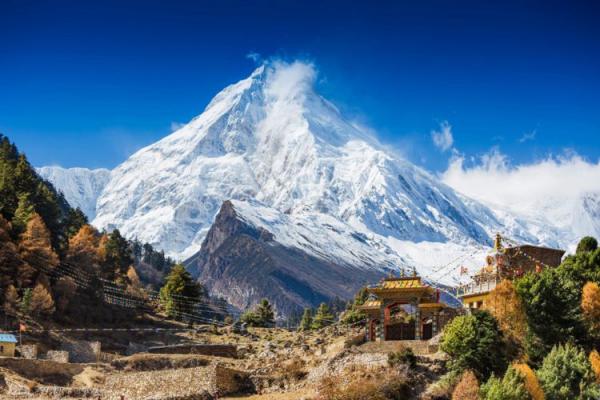 Buddhist monastery and snow-white mountain peaks of the Himalayas

The Himalayas are mountains with which a huge number of legends and mystical stories are associated. It is here that Everest and eight other mountains, which are the highest on the planet, are located, and three main river systems immediately originate. Thousands of climbers dream of climbing one of the peaks of the Himalayan mountain range, but not everyone succeeds. This attraction of Bhutan attracts both lovers of stunning views, as well as those who are looking for true spiritual enlightenment. It is beautiful and interesting here at any time of the year, and the authentic cultural traditions of the local population add interest to the Himalayas.

It will not be difficult to organize a trip, having at our disposal an overview of interesting places that any tourist should see in Bhutan. For those who travel to this country for the first time, it would be wiser to trust professionals in organizing excursions, and the recommendations above will help you choose the best sights to visit. Guides in Bhutan differ in the cost of services depending on the experience and range of services provided, but in any case, it will be more convenient for inexperienced travelers or those who do not want to be distracted from their vacation.

When choosing a guide, it is better not to contact to street callers. More than seventy licensed agents operate throughout the kingdom to help organize trips to the sights of Bhutan. Remember also that tourists should pay a special fee for each day of their stay. Knowing these nuances and having made up an idea about the attractions of the country from photos, reviews and descriptions, you just have to choose a hotel in Bhutan and book a tour. Read also about the sights of Kyrgyzstan and get inspired for your further trip to Asia! 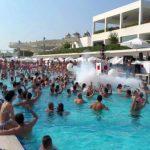 The best hotels in Turkey for young people 2021 (Actual rating) 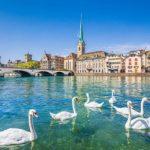