Abandoned hotels can be safely attributed to one of the attractions of Turkey. From the moment the tourist boom began, Turkish resorts began to be actively built up with new hotel complexes, but over time, abandoned hotels in Turkey appeared, where they have not received guests for a long time. Moreover, furniture, household appliances and even water attractions have not yet been taken out of some of them. If you look from afar, it seems as if the door is about to open and one of the tourists or staff will come out. But as soon as you go inside, it becomes obvious that no one has been here for a very long time, no one is watching the territory and everything is gradually being destroyed. In a certain sense, such buildings are of interest to travelers, because where else could one not only see chic halls and rooms, but also touch the decoration and for a moment feel like a hero of an oriental fairy tale.

“Museum” of the hotel industry m.a.r.c.

The number of photos of abandoned hotels in Turkey published on social networks and travel forums is constantly growing. As a rule, they are placed by travelers who lived nearby during their holidays and, of course, personally wanted to look at such a curiosity. In any other country, the “stuffing” of such buildings and adjacent structures would have been stolen long ago, but here everything has been preserved almost unchanged (taking into account the past years without operation). 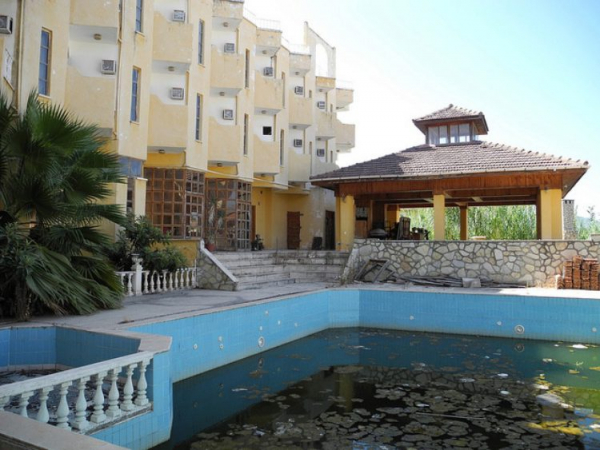 Entrance to such kind of “museums” of the hotel industry is almost always free, so everyone can go. Another thing is that the impression after such a visit is not always joyful – there is a slightly oppressive atmosphere inside, so many say that they have a desire to leave as soon as possible. However, there are those who like visiting abandoned hotels. So, before traveling to Turkey, you should definitely find out which of them are considered the most colorful, so that if you want to go there and see everything with your own eyes.

Perhaps the most famous is the Holiday Area Eco Dream Club Sea Resort, a five-star abandoned hotel in Turkey in Camyuva, a small village near Kemer. The history of its creation and closing consists of several stages:

The now completely abandoned complex was built at the beginning of the twenty-first century, and especially for tourists from post-Soviet countries. Architects and designers tried to make it unique – they arranged a huge territory, took care of a huge amount of entertainment, in particular, they organized a real farm.

After the opening, guests from all over the world were surprised and delighted with the interior decoration of rooms and halls, an abundance of restaurants and attractions, and in terms of service level, the hotel, which is part of the Naturland chain, was deservedly considered one of the best in the country.

But, starting from 2007-2008, the hotel began to fall into decay. Versions of why this happened were very diverse, ranging from fraud with the payment of taxes and huge debts to the bank and ending with the death of the then owner.

Over the course of several years, the now abandoned hotel in Camyuva, Turkey, was renamed several times and transferred to the ownership of different hoteliers. At the same time, no cardinal repairs and transformations necessary for any really solid hotel were carried out. Therefore, it is not surprising that gradually the charm of the hotel disappeared and there were no people wishing to spend their holidays there.

In 2011, the first, but not the last, strikes of workers who were not paid took place, after which part of the hotel was closed, and subsequently it completely stopped receiving guests.

Here is a video of this ill-fated hotel

To date, the only visitors here are curious tourists who want to take a look at what was once one of the most original Turkish hotels.

Those who go on vacation to Alanya will also have a great opportunity to visit an abandoned hotel. True, for this you have to climb the mountains of Mahmutlar and walk about ten kilometers until the Syedra Kalesi sign appears. Going inside is not a problem – there is no security, and inside you will be immersed in the Middle Ages. The hotel is decorated in Spanish-Italian style and much of the decoration has been preserved. Of course, there are signs of dilapidation – partially collapsed tiles, peeling paint and rotten wood paneling. But here you can enjoy the sounds of nature and silence. In the halls, even fireplaces and some kitchen utensils have been preserved. The atmosphere of seclusion is broken only when you can see the houses next to the castle, in one of which the caretaker of an abandoned hotel lives. 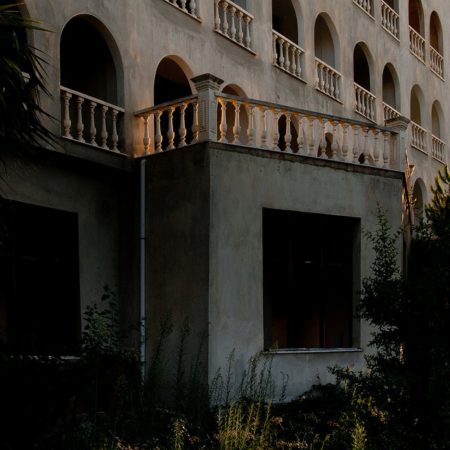 Facade of an abandoned hotel in Turkey Marcel Oosterwijk