The Radisson Royal flotilla, together with director Yana Zavyalova and the theater project Dinner with a Classic, invite Muscovites and guests of the capital to their new performance.

On July 6, on a flight departing at 19:30 from the pier “ Hotel “Ukraine” will host the premiere of the musical “Princess Tyufyakina's Necklace”.

Take care of your wallets, watches and jewelry … And don't worry! If you applaud, sing along and do what you are told, then everything will end well and no one will get hurt! 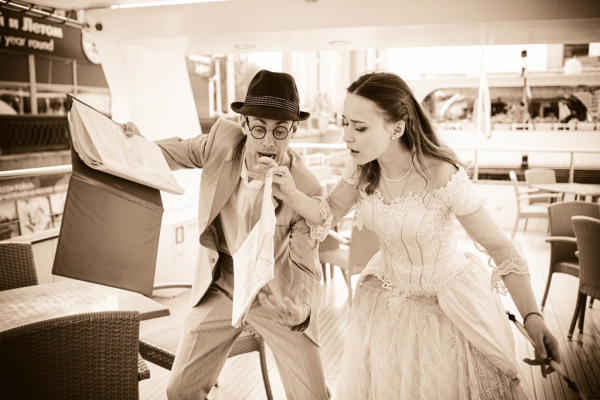 Who those weird guys? Why are they armed? And what does Princess Tyufyakina have to do with it? You will learn the answers to these questions on the cruise during the action of the adventure comedy Princess Tyufyakina's Necklace. This is a new and most unusual performance that will immerse you in the atmosphere of the NEP and Prohibition. It won't be boring for sure! Plunging into the colorful era of the 20s. of the last century, the audience will witness the capture of the yacht, become participants in the casting for the theater troupe, and will also assist in the search for the stolen family diamonds of the princes Tyufyakin-Obolonsky. And all this over a delicious dinner inspired by the legendary underground taverns on the snow-white yacht of the Radisson Royal Flotilla.

The intermission of the performance will take place in the middle of the voyage, and you can go out on the open deck to take fascinating photos.

The slow flow of the river, beautiful views of your beloved capital from a comfortable yacht, a delicious dinner recipes of Soviet cuisine, and an immersive musical and theatrical show – all this awaits you on board the snow-white yacht of the Radisson Royal Flotilla.